This isn’t the first time nymphs have been connected to peonies.

You may be familiar with the one Greek myth about a beautiful nymph named Paeonia that Apollo falls for. This captures Aphrodite’s attention of course and the little nymph becomes embarrassed, turning bright red. So Aphrodite decides it’s only logical to turn her into a red peony.

And that is how peonies came to symbolize bashfulness.

But there’s nothing to be bashful about when it comes to this herbaceous beauty. A lovely single with its large pale pink/nude flowers and contrasting golden stamens, it is one of the prettiest mid season bloomers and recently took home an AGM which means it will do exceptionally well in your UK garden.

And it’s a winner with the bees too!

Peonies such as ‘Nymphe’ that have single, open-shaped flowers are irresistible to pollinators. Pollen is prized as it’s a protein source for bees so they will work hard to get it. However, if they can conserve their energy in this process, they will. So they will usually avoid flowers with many layers of petals they have to wiggle through. That’s why the easily available, pollen-laden stamens in flowers shaped like ‘Nymphe’ are easy pickings for those busy honey bees.

Peonies are a bit like lollipops for bees as they have what is called ‘extrafloral nectaries’. This means that the nectar becomes available for harvesting at the bud stage already. So this is another reason bees really like peonies - they don’t have to wait for them to bloom to start collecting that nectar!

Clearly, patience isn’t high up on the priority list for pollinators.

Also, if you’ve ever wondered why there are so many ants on your peony buds it’s because they also like those nectary lollipops. And you won’t have to worry that they are damaging your buds. In fact, they are helpful to them as their presence wards off other insects that would prevent them from blooming. So don’t get rid of them! Ants and peonies are firm friends.

There is a popular line of thought that if you don’t have ants on your peonies they won’t open, as the ants make little incisions on the bud whilst harvesting the nectar which enables the bud to open.

This is not true. As mentioned before, it is more a case of the ants warding off other more harmful floral-feeding critters that helps the blooming to be more successful.

More reasons to love those bees and ants!

With the growing awareness around the importance of pollinators in the garden there has been a surge of gardeners being more intentional about creating environments that are insect friendly.

And as we saw at the Chelsea Show this year, it doesn’t matter if your space is limited. You can plant things that will encourage a symbiotic eco system no matter how little space you have.

Balconies, window boxes and even one small piece of wall with containers on can become a playground for all sorts of creatures. 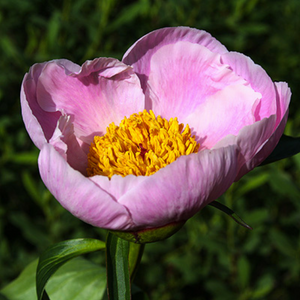 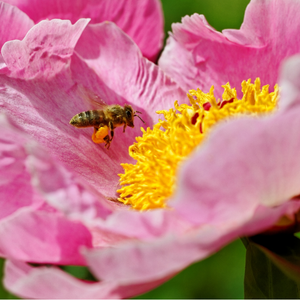 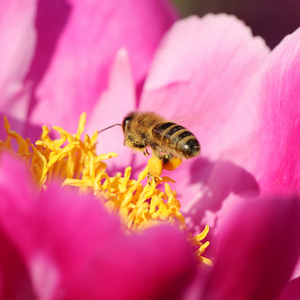 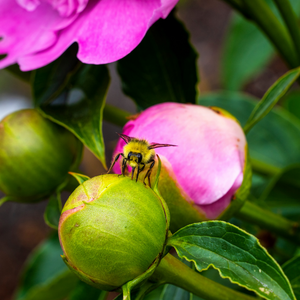